Criminal Charges To Be Laid Against Urinating Stellenbosch University Student 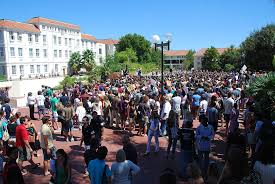 Criminal Charges To Be Laid Against Urinating Stellenbosch University Student

A black first-year student at Stellenbosch University was awoken to what he described as a strange noise in the early hours of Sunday morning. When he investigated the source of the noise, he found that a white student had broken into his room and was urinating on his belongings in an alleged racially charged attack.

Babalo Ndwayana has revealed that he will be laying criminal charges against Theuns Du Toit. In the video filmed by the victim, Du Toit can be seen urinating on Ndwayana’s belongings. The incident took place at the Huis Marais residence on the Stellenbosch university campus.

Stellenbosch University has suspended Du Toit and have promised a swift but detailed investigation to determine the final outcome of the incident. They added that expulsion and/or criminal charges are not excluded from the possible available options. This will be divided based on the findings of the investigations.

The South African Students Congress (SASCO) wants Du Toit expelled. In a statement, they say justice will not be served until he is expelled from the institution for the racist attack on Ndwayana. They add that they will work to ensure Du Toit gets the punishment he deserves.

The statement read, “We understand that the university will go through its disciplinary processes for it to reach a conclusion. However, in our eyes such a process must be nothing but a formalisation of his expulsion”.

De Villiers said, “We acted swiftly and decisively to uphold our commitment to a culture of inclusivity. What happened at Huis Marais is not acceptable. No student has the right to diminish another student’s human dignity or rights in this way”.

The Portfolio Committee on Higher Education, Science and Innovation has welcomed the university for suspending Du Toit.

They have also condemned the act of racism and discrimination and directed the university leadership to ensure that all due disciplinary processes are followed in addressing this dehumanising and unacceptable behaviour.

It is expected that the university will deliver its decision on the matter by Thursday 19 May 2022.