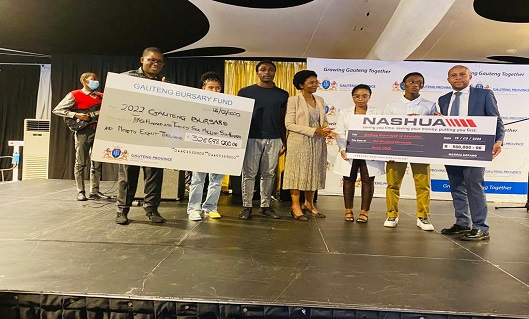 Since 2009, about R2.2 billion has been invested towards bursaries equipping young people with necessary skills through financial assistance. An amount of R420 million has been set aside for the Gauteng matric class of the 2021 academic year.

During the handover of bursaries to top and deserving matriculants of the Class of 2021 at Birchwood hotel, in Ekurhuleni, Premier David Makhura reminded students to always appreciate parents even if they have never been to university.

“I thank the parents for the work that they are doing and for the time you have invested in educating these children. The next generation must always be better than the last one,” said Premier Makhura.

Makhura warned students especially first year students to associate themselves with good friends as adapting from being away from home is difficult.

“The first year of university can break you, it is a very difficult year. Have the kind of friends that will make sure you go to the library. Focus on your first year, it is the year for the journey of leadership it is not just for academics, leaders are made out of universities,” said Premier Makhura.

He said some of the job occupations in the world that exist now might not exist by 2030 and almost 41% of new jobs that did not exist are now in the making.

“About 35% of the jobs that exist now, and 35% of the skills we have now will not be needed in a few years from now. Our tertiary institutions must be prepared for that type of world.

“That is why we are so invested in basic education, in technology, the deployment of ICT in education, but also changing the curriculum including at ECD levels. We are building future ECDs. We are not just investing in you, we are preparing you for the world that is increasingly complex,” said the Premier.

MEC for Education, Panyaza Lesufi said that he was proud to declare that the department was nothing else but dream shapers, dream makers and want to change the face of human capital.

The department has just finalized its Master Skills plan which dictates the kind of skills Gauteng will need by 2030.

“We need young minds to respond to new things. We are talking about a future that will take care of everything that we need, new ideas and new skills.

“We are tired of buying form other people, it is time they buy from us as well so that we can compete and develop and we can be a better nation as well, it lies in your hands. This country must be no longer be a country of consumers but of producers,” said Lesufi.