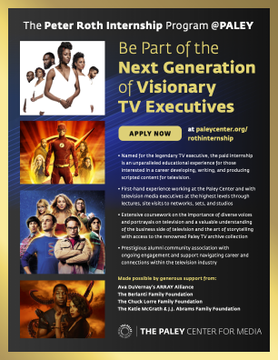 The Peter Roth Internship Program, named in honor of the legendary television executive, offers 20 talented undergraduate students from diverse backgrounds, underserved communities, and underrepresented groups in the media and entertainment industry an unrivaled paid apprenticeship experience for those interested in a career developing, writing, and producing scripted content for television. This prestigious internship has been created to inspire the next generation of television professionals to embody Peter Roth’s visionary ideals including his commitment to innovative storytelling, his love for writers, and his passion for the art form of television. The program will also underscore the critical importance of nurturing a diverse array of creative voices and portrayals on television—a hallmark of Peter Roth’s career.

The program will create ongoing access and opportunity to help build more diversity in the industry and inspire the next generation of television professionals.

The Paley Center will offer students a comprehensive, paid internship that expands upon the institution’s long-running accredited internship programs and includes three key components for an unparalleled educational experience. Using the renowned Paley Archive and its unmatched collection of television programming, the Paley Center will offer an extensive course to help students better understand the importance of diverse voices and portrayals on television. Interns will also attend guest lectures, meet-and-greets, and Q&A sessions with television executives, talent, showrunners, writers, and other members of a creative team to gain an appreciation for the art of storytelling. The program will also include first-hand experience working at the Paley Center, along with site visits to networks, sets, and studios to provide a valuable understanding of the business side of television.

The breakdown is as follows:

The internship will be held in person at the Paley Center in New York City.

We are so proud that the Paley staff is 100% vaccinated. Therefore, all employees and interns are now required to have a booster shot and provide proof of vaccination.

Applicants must be undergraduate students who are currently enrolled in a college degree program at an accredited college/university with a GPA of 3.2 or higher and who will be junior or senior in the fall of 2023. The selection is highly competitive and based on a combination of criteria including evidence of exemplary academic achievement and exceptional leadership skills.  Students from diverse backgrounds and underserved communities are strongly encouraged to apply.

For a complete application, please provide:

For more details about the program and FAQs to apply, go to www.paleycenter.org/rothinternship.

If you have additional questions, please email [email protected] and we will respond to you shortly.

Peter Roth’s inspiring and visionary leadership has earned the respect and admiration of his colleagues, as well as actors, writers, directors, and the millions of viewers the world over who have benefitted from his enduring body of work. Peter’s acumen for mentoring young talent and developing widely successful programming made him a vital part of the success behind iconic series that have resonated with audiences everywhere, including hits such as All American, Arrow, Cherish the Day, Fringe, George Lopez, Gilmore Girls, Nip/Tuck, One Tree Hill, Pretty Little Liars, Queen Sugar, Shameless, Smallville, Supernatural, The Big Bang Theory, The Closer, The Flash, The Mentalist, The Middle, The Vampire Diaries, The West Wing, Two and a Half Men, Westworld, and countless others. During his twenty-two-year tenure at Warner Bros. Television Group, as President and then Chairman, thirty-two scripted primetime television series have reached the coveted hundred-episode milestone.

Previously, Peter Roth served as President, Fox Entertainment, President of Production at Twentieth Network Television, and President of Stephen J. Cannell Productions, where during a six-year tenure, he was involved with the creation and sale of many critically acclaimed series. He spent ten years at the ABC Television Network, where he began his television career in 1976 as Manager of Children’s Programs. He was promoted that same year to Director and was responsible for ABC’s number-one-rated Saturday morning schedule. In June 1979, he was named Director of Current Primetime Programs and was promoted to Vice President, Current Primetime Series, in November 1981.

About The Paley Center for Media

The Paley Center for Media is a 501(c)(3) nonprofit organization that leads the discussion about the cultural, creative, and social significance of television, radio, and emerging platforms, drawing upon its curatorial expertise, an international collection, and close relationships with the media community. The general public can participate in Paley programs in both New York and Los Angeles that explore and celebrate the creativity, the innovations, the personalities, and the leaders who are shaping media. They can also access the Paley Center’s permanent media collection, which contains over 160,000 television and radio programs and advertisements. Through the global programs of its Media Council and International Council, the Paley Center also serves as a neutral setting where media professionals can engage in discussion and debate about the evolving media landscape. Previously known as The Museum of Television & Radio, the Paley Center was founded in 1975 by William S. Paley, a pioneering innovator in the industry.